Exactly 6 years ago I did my first big hike which was Half Dome in Yosemite NP.  The hike is just about 16 miles round-trip.  We prepared for this hike almost every weekend by going on smaller hikes.  Started the hike off strong and had to make frequent stops along the way.  Had so much water and snacks to really weight you down as you hike.  Popping Advil like candy at the time as well.   During the time I had severe fear of heights.  Could not get close to any edges while hiking without getting quizy in my tummy!    But finally reached Sub Dome the part before the infamous cables to get to Half Dome as it’s known.  And I could freaked and could not even get close to the cables to hike up!  My DH at the time spent several minutes trying to convince me that it’s fine I will catch you.  Nope could not do it.  To this day he says I was a chicken-shit for not doing it.

Six years later it still haunts me that I didn’t do it!.  So finally all the starts were lining up for another opportunity to hike the up the Cables of Half Dome.  One of my friends happen to get a camp sight in Upper Pines Campground for Friday and Saturday night.  All I needed was the permit to hike the cables.  Which 4 of our friends who were interested applied for.  Jackpot one of us got it for all of us.  Now I was secretly hoping that it would not happen but it did..we won the Half Dome lottery.  A place to stay and the permit to hike.  So without thinking too much about it packed up on Thursday night with only a tent, sleeping bag, and clothes.  My son being 14 years old was also interested in hiking up to Half Dome.  So we reached the campsite around 10 or so and set up tent.  We awoke at 3:30 am and headed to Half Dome at 4:18 am.  This time around though it seemed very different.  We did not have to make as many stops and also not popping any pills.  I had no fear of heights or quiziness.   We reached  the Sub Dome around 9:45.  Hiked without any hesitation or fear.  Actually stopped just to enjoy the gorgeous views around me.  Not a cloud in the sky…perfect temp at average 75.  Reached the infamous cables and ready to do this!!  I had a chat with my 14-year old that he better be mentally ready because there is no turning back once you start climbing.  He was ready he said.

Climbed to half way up and turned around and enjoyed the beauty all around me.  It was truly in ahaaa moment.  It was a spectacular 360 view of the the beautiful Yosemite mountains all around.  The cables were not easy it does take a lot of arm strength.  But we did it…slowly but surely.  Spent over an hour on top and then headed back down.  So on the way back down the cables we see a little boy around 8-9 years old coming up with his parents in front and back of him.  Then we we see a little girl around the same age with her dad.  Both had harnesses.  Wow!!! How brave were those kids.  The amazing part was I was able to come down facing the view and not the rock and again no freaking out.  I highly recommend doing this hike.   It took 6 years and many hikes later to be able to get over my fear. 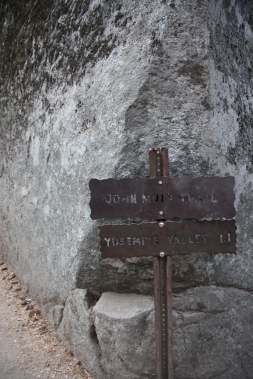 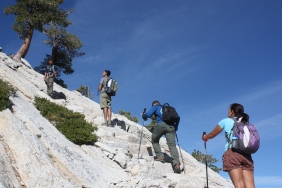 Looking down from Diving Board

Look what i found

View from the Cables

View from the Cables 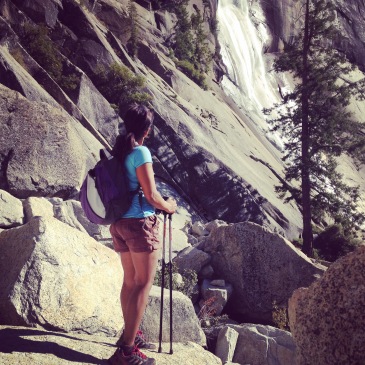