This weekend was Holi which is a festival of colours and the festival of coming of Spring.  As well as celebration to bring all cultures together and  to forget where you came from.

Holi is the legend of Prahlad and Hiranyakshyap. The legend says there once lived a devil and powerful king, Hiranyakshyap who considered himself a god and wanted everybody to worship him. To his great ire, his son, Prahlad began to worship, Lord Vishnu. To get rid of his son, Hiranyakshyap asked his sister, Holika to enter a blazing fire with Prahlad in her lap, as she had a boon to enter fire unscathed. Legend has it that Prahlad was saved for his extreme devotion for the lord while Holika paid a price for her sinister desire. The tradition of burning Holika or the ‘Holika dahan’ comes mainly from this legend.

Here is a Fab Holi selfie! 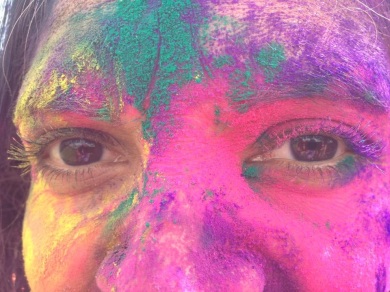